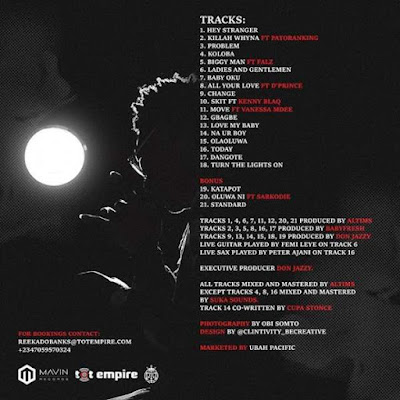 Reekado Banks, whose real name is Ayoleyi Hanniel is a talented vocalist, songwriter and eccentric performer who started rhyming and putting down lyrics in his notepad as far back as when he was just 15. Soon after, he decided to believe in his craft and started recording music professionally with the guidance of his elder brother who is now his manager.

He released his first singles under the Mavin Records imprint; “Turn It Up ft. Tiwa Savage” and “Chop Am” which received massive airplays and are still enjoying excellent reviews from fans and the media all around Africa. He developed his own style, carved a niche for himself and became well known for delivering distinctive unique verses and hooks on hits like Dorobucci, Adaobi and Looku Looku.  These made him a formidable force to be reckoned with and set him apart from the regular fast rising recording artiste.

The recent graduate from the University of Lagos where he studied History and Strategic Studies became the talk of the town after he won the prestigious Headies Next Rated Artiste award. On the birk of this achievement, he decided to announce of the release of his debut album “SPOTLIGHT” last month.

The album opens with "Hey stranger" which is a smooth song with a great storyline, but should be regarded as a very weak intro to this body of work and its inclusion on this album was poorly arranged.

It is followed with album’s second track, "Killah Whyna" featuring Patoranking which is a slow-tempo groovy reggae song, and the use of the flute as the sole wind instrument present, made the record have a distinctive style to it. Which both artistes made decent efforts to deliver their content.

Track 3, "Problem" produced by Mavin's in house producer Baby Fresh is not an exciting effort by Reekado with his choice of lyrics. The only spectacular thing here is the drums and relatable hook in the song.

"Koloba" produced by the talented Altims is the type of song that everyone would ultimately be accustomed to. It has that cultural-dancehall feel to it and the live-production on it is a brilliant one.

The album officially kicks off with "Biggy Man" featuring Falz which is a complete record in its own right. The arrangement with its additional vocals, the instrumental and plug-ins on this track is spot-on and both artistes had a fantastic outing on this song.

The idea for the next track "Ladies and Gentlemen" is a good one. One that was set to have a Fuji effect to it, but ended being a very boring and manageable song.

Track 7 "Baby Oku" is the regular highlife song that we hear every day. Its highlight is that it showcased Reekado Banks’ vocal strength which resulted into a sweet song.

“All your love” which featured D'Prince is another below par effort which was simply saved by its additional Indian vocals and beat. D'Prince came out to deliver his unserious lyrics and there was nothing intriguing about his verse.

This track is followed by Change which is a song with a very important message. The song has all the necessary ingredients in the sound to make it an enjoyable one as he paid homage to late Afrobeat legend, "Fela".

Up next, is the skit on this album performed by the fast rising & talented comedian "Kenny Blaq". The Kenny Blaq brand in my opinion is a goldmine that hasn't fulfilled its purpose. I'm glad he caught the eye of Don Jazzy who saw it necessary for him to contribute to this album and add a comic relief feel to this piece of art. Kenny Blaq, however didn't disappoint as he had a decent outing.

Track 11 "Move" featuring the multi-award winning Tanzanian princess, "Vanessa Mdee" is a really nice composition on this album. It had different genres coming to play on this record. A song that is sure to build upon Reekado Banks’ fan base. Vanessa’s delivery was in her local dialect which added a flavor to this track.

Gbagbe produced by Altims is another tribute on this album to Fela which was fused with his famous "a rararara o rorororo" line. It has a decent live-production credit by the mixing engineers on this album.

This track is followed closely by "Love my baby" which has a mixture of the pop & r'n'b feel to it. This is a song that has happiness all over it and very difficult to hate-on.

Track 14 "NA Ur Boy", here Reekado Banks shows how thankful he is as to how far he has come and how grateful he was to his fans and Don Jazzy. The idea on this song is similar to "Say my name" on Wizkid's debut album.

Olaoluwa produced by Don Jazzy is a very good song this album. The targeted audience of this song is the elderly & aged people that just want to vibe and praise God in their own way; a type of record specially included for the Owambe Saturdays.

The next track "Today" is a song that shows how versatile Reekado Banks can be, as he kept the mood on this song on a very high note and didn't let the pressure of the up-tempo beat bother him. Reekado Banks got everything right on this song.

Track 17 "Dangote" is an excellent effort by Reekado Banks as has a message in it,  he tries to encourage people to keep doing what they do. The only down side to this record is the fact that it is quite repetitive.

The album closes with "Turn the lights on" which is a spot-on closing on this album, relating to the title of this body of work; the spotlight is finally switched on by Reekado Banks. Here, he signs out and finally has time to tell his fans about his musical journey thus far, and how he plans to take on the world as he repays the belief that his well-wishers have in him.

The next three bonus tracks which made this album much longer than it needed to be; Katapot, Standard & Oluwa Ni (featuring Sarkodie). The track with Sarkodie isn't all that different with the original one, Sark just gave it his own style, bossed the song and made it an interesting one to listen to. 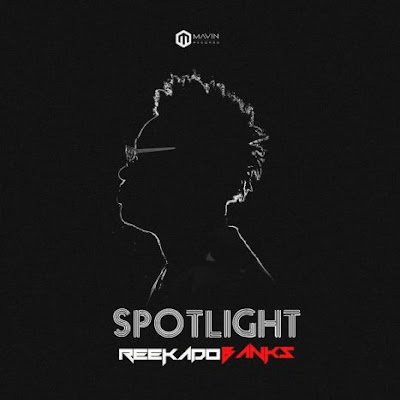 Making the needed judgement as regards to the hype that Reekado Banks had, the general performance on this album is really an average one. Most songs are really just there, some are old and forced. Only a few great songs that would actually do well. On a lighter and more important note, I refuse to believe that Don Jazzy isn't confident of his own craft anymore as I'm surprised as to why he produced not more than just 6 songs on this album. For a man that has sole-production credits on multi-award winning albums in the past during the Mo'Hits reign and Dbanj's rise to his legendary status.