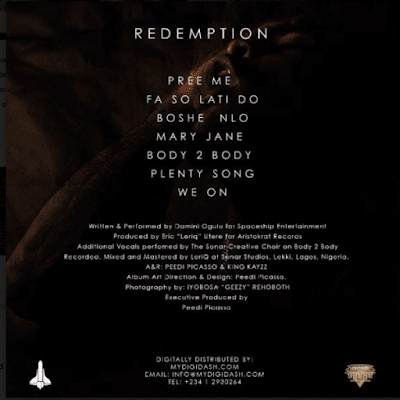 
A child is given birth to, every day of the week; but a standout child is easily recognized where the lots of them are gathered, either because of the child's background, or the simple achievements and accolades the child has. This project backs up this fact, as Burna boy finally decided to settle down, and take the music-making side of his art seriously and decided to go home. To Aristocrat records so he could blend-in with his favorite tutors. And finally get Leriq produce records for him again. This brilliant Ep is that which showcased the prominent factor that distinguished Burna boy from the others, when he first came onto the music industry.

A simple-confessional project, which he thinks aloud, as he takes us through his personal struggles, the price that came with the fame, and of course just being the real guy that just wants to have fun, and make good music. The Ep is just 7tracks long, and were all produced by the number one guy from the get go of his "Leaving An Impact For Eternity” Album, Leriq... /call the paramedic/. And the artistic direction was handled by his previous record label executives (Peedi & Kay) of Aristocrat Records.

Opening the album is "pree me" which is a slow tempo tune, that just has great vibes to it, and fuses well with the drums and kicks in it; which is topped off with the brilliant lyrical content. Track2 "fa so lati do" has this old school feel to it. It has the snapping Fingers plugins in it, a decent sing-along type of record. The Don gorgon switches his style up a little with the next track "Boshe Nlo" which is the standout song on this Ep. Here, we see how talented Burna is, with his songwriting skills whose outcome has the capability of relating to every corner of the society.

This track is followed with "Mary Jane" which is the lowest point on this Ep; He didn't actually find the right melody to this type of tune, and fell-off as he tried to create the needed picture in this song. Track4 body to body is another brilliant piece of work on this Ep. It showed how versatile Burnaboy can be. The melody on this record was simply blissful to hear. The presence of the choir additional vocals also made this record a really solid one.

The Ep almost draws to a close with "plenty song" as Burnaboy takes us to the time, he serenaded us with the Rockstar & Don gorgon sound... but here he showed off his bragging rights, as to how he has matured and nurtured his craft from the previous sound he blessed us with. The album draws to a close with the perfectly written "We On" that exhibited how international the Burna boy sound can really be, and how original his content is. And Of course how spot-on he gets the right bars to the verses, where he decides to lay back his delivery, to where he picks up his flow with the singing, a commendable way to end the Ep.

The whole content is a top notch one. It doesn't get boring at any point. Leriq's production was a 100% on so many levels; with the matured beats and great melodies from the keyboard.